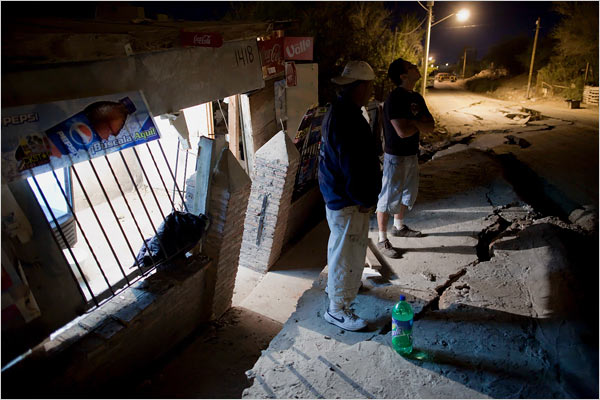 As I told you in class, this has been an earth-shattering week, literally.

On Sunday, there was a 7.2 earthquake in Mexico near the California earthquake. Sustained shaking of up to a minute was felt as far away as Los Angeles. Luckily, there were few injuries, but at least 5000 homes were damaged or destroyed.

And on Tuesday, there was a 7.7 earthquake off the coast of Sumatra, Indonesia.

Finally, this week saw some minor earthquakes in Alaska near Mount Redoubt, an active volcano, indicating that magma is pushing upward, and it might soon erupt.

Add these to the Haiti earthquake and the Chile earthquakes, and there have been a LOT of high-magnitude earthquakes so far in 2010. Is this weird? A precursor to 2012?

Um, no. Earthquakes happen all the time, and these earthquakes have all happened on established, major fault lines. On a geologic time scale, there’s nothing unusual at all about these quakes. CNN discusses this in more detail.

Earthquakes are so common that we’re tracking them all the time. The US agency responsible for tracking earthquakes is the United States Geological Survey (USGS). Did you know that if you type “earthquake” into Google, it gives you a listing of some of the recent earthquakes reported by the USGS.

7 Responses to Earthquakes and more earthquakes!